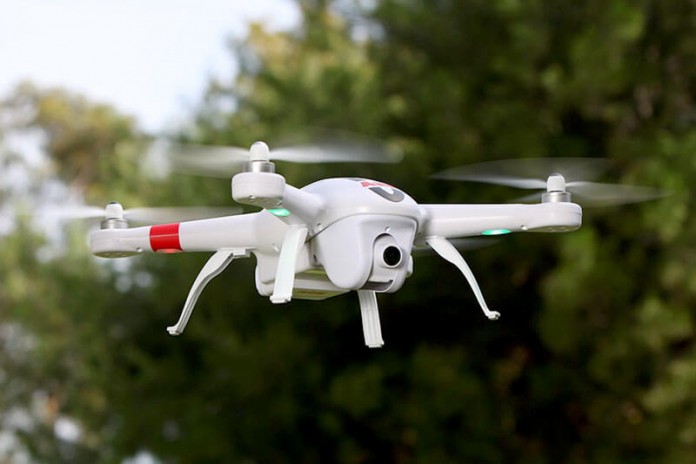 AEE, a leading manufacturer of recording and UAV equipment, does not disappoint its fans.

Not just for fun flying, it is a photographer’s boon as well. If you have this drone in mind, you would want to know what makes it fly well, any minor imperfections it may have, and if there are any points to ponder before buying it. You may also have some curiosity about how it compares with other drones in its price range. 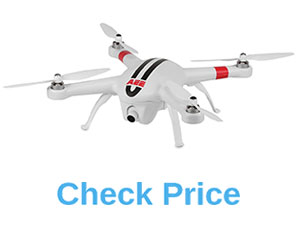 The AP10 comes with a quadcopter’s basic components. The box includes the drone itself, a lithium battery, a WIFI adapter, and a transmitter with a smart phone mount.

It also comes with 8 self-tightening propellers and helpful landing gears. To help you put the drone together, AEE has included a wrench.

The drone has an integrated 16 megapixel camera that takes stunning photographs at 1080p.

One boon is that AEE AP 10 parts are readily available. You can buy its ST10 camera, interface adapter, aerial searchlights and spotlights separately. Get a paddle protection ring to make it resilient against crashes. Get yourself an accompanying battery charger if you want to prolong this drone’s battery life.

Best features of the AP10 drone 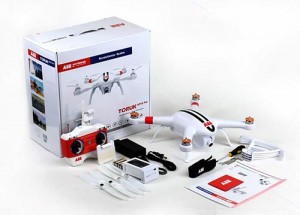 The AP10 has an awesome list of features that put it in a class of its own. A dynamic drone, it is also a photographer’s dream.

Large, 10 inch (0.264 meter) propellers keep the AP0 flying steadily. They energize and stabilize the drone as it moves. AEE includes propeller guards that prevent breakage should the drone crash.

The return to home feature protects the AP10 in two ways. It recalls the drone to its take off point should it run out of battery. It also saves you the anxiety of tracking it should it become lost.

Few people will miss the AP10 as it cruises the skies. White, gleaming and streamlined, it is a compact craft that gathers attention. Its sleek frame also makes it easy to store.

AEE offers pilots two ways to control the AP10. You can fly the drone and control its camera using its application, which you can download using an IOS or Android device.

Alternatively, use the transmitter that comes with the drone. It commands the AP10, enabling it to decide its altitude and flight direction. It also controls the drones integrated camera, telling it how to capture video footage and images.

AEE designed the aforementioned transmitter for convenience. Serving as the drone’s control center, it comprises a signal transmitter, a WIFI repeater and a smart phone holder. A WI FI pairing switch sends signals to the drone while another controls its camera angle. You can control the drone’s flight modes via this controller as well.

Indicators show how well the drone is recording or capturing photographs. The left stick controls the yaw, while the right manages the drone’s pitch and roll. It gives the drone control of its direction.

Fans of aerial photography should consider the AEE Toruk AP 10 Pro hd drone camcorder. It has an array of jaw-dropping capabilities. Few small drones can offer aerial footage of such quality.

The AP10 comes with a 16 megapixel camera that captures sharp footage like never before. It offers photographers panoramic, dramatic, high-definition views of vast landscapes from the air. This nifty camera does this wth a 120 degree wide angle lens and a sharp, F2.9 apeture.

The 1080p camera allows real-time telemetry, meaning that you can see the footage your drone captures, as it does so. Edit the footage via the transmitter, or your smartphone device.

Synchronous view is also possible because of a sophisticated WIFI connection. Remote sensing allows your Android or IOS device to record images from the air. The quadcopter includes a WiFI adapter that enables the drone to connect seamlessly with your mobile device. 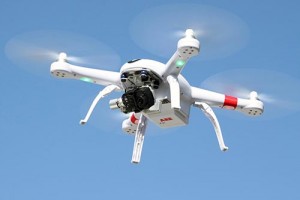 The drone moves at 65.6 ft/s (20 m/s). This is a comfortable speed that allows it to scour landscapes thoroughly, yet not too slowly.

At only 2.87 pounds (1300 g), the AP10 is light for a drone that comes with an integrated camera. It is easy for an inexperienced pilot to navigate.

It is evident that the AEE Toruk drone has a set of qualities that will inspire and awe. It packs a punch for a quadcopter its size. It is a top addition to any drone collection.

This drone has a winsome set of pros that promise a positive flying experience. The AP10 is an effective addition to any drone arsenal.

This drone travels at only 49.2 ft/s (15m/s) but covers a long distance. An impressed reviewer mentioned that it traveled 0.25 miles (402 meters) to his grandmother’s home.

The AP10 is a highly durable craft. Many of its fans remarked that it crashed several times without sustaining damage. 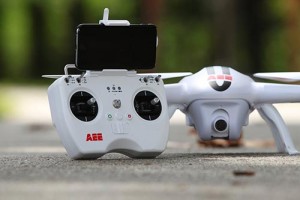 The drone and its transmitter communicate effectively. The drone receives signals from the controller at a distance of 1500 feet (452 meters). It travels at high altitudes as a result.

Equipped with a hover feature, the drone flies steadily. It can hover in place when pilots need it to stay.

This stability applies to the camera as well. A gimbal keeps the camera in place, allowing it to capture sharp, 3D footage with no shaky lines.

AEE is a Chinese-based company with headquarters in the United States. Support is available for users in both English and Mandarin.

A user was impressed by the quality of support that he received. He commented that the staff attended to his needs quickly.

It is difficult for you to lose this drone. Effective GPS flight control establishes the drone’s flight location so that it can return to its launch point safely should it go off course.

Svelte and brilliant white, the AP10 is easy to spot in the air. Its clean lines are difficult to miss. Customers comment on its attractiveness.

Many users are satisfied with the way they can control their drones using their IOS or Android devices. They commented that there is no need for a transmitter.

A dynamic 5300 mAh lithium battery allows the drone to spend a longer time in the air. It can fly for up to 25 minutes.

The AP10, made by specialists in recording equipment, is the perfect drone for photography buffs. The 16 megapixel HD camera captures stills like a dream. It also offers users panoramic views with its 120 degree lens.

There is no need for you to worry should the propellers or camera on your drone become damaged. You can buy these accessories easily from AEE. This eases worries about the durability of the drone.

Every drone has imperfections. The AP10, like the others, will leave you will a few points to ponder.

There is a small flaw in the AP10’s tracking system. The transmitter and application in some cases do not track the drone’s location accurately at times.

Fortunately, only one user reported such a fault. To add, the Return to Home feature recalls the drone to its launch point should it become lost.

The gimbal does not stabilize the camera at times. One pilot commented that sometimes his drone captures shaky footage. This, however, is not a common occurrence.

These minor problems point to a few flaws in the AP10’s software. Some software rewriting would make this an ideal drone.

The AP10 Pro is a relatively new drone, so you would want to see how it stacks up against similar drones. One such drone is the renowned DJI Phantom 3, which has comparable features. 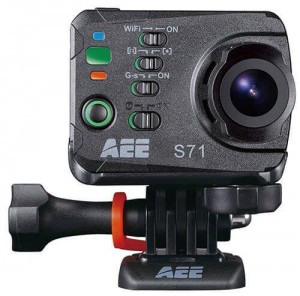 1. The AP10 has a more powerful camera

Both drones offer live, high-definition images of the subjects they capture. The AP10, however, has a camera that is in a class of its own. At 16 megapixels, it presents clearer, real-time video footage than the DJI Phantom 3, which has a 12 megapixel camera.

2. The Phantom 3 has a sturdier camera gimbal

The Phantom 3, by comparison, has a sturdier camera gimbal. Few reviewers have expressed concern about any “jello” effect on the footage captured.

The Phantom 3’s mobile application communicates with the drone more clearly than the AP10’s application. AP10’s application offers real-view telemetry, but has fewer calibration features. Conversely, the Phantom 3 allows you instant downloading and sharing. It also features an extensive media log and lets you edit your footage as you record it.

5. Both drones have safety features for first time pilots

Both drones have safety features that will give first time pilots security. They return to their launch points when their batteries run low. They hover in place if you need them to. These drones have location features that allow you to track them.

6. Both drones have comparable speeds

Despite discovering its features, pros and cons, you may still wonder if the AP10 is the right drone for you. These recommendations will help you decide.

1. Buy this drone if you are an avid photographer

If you are an avid photographer, the AP10 is the drone you are looking for. The 16 megapixel camera is an ideal tool for photographers. It takes fascinating stills from the air, though its gimbal is sometimes unsteady. Overlook this because it gives clear footage 95% of the time.

2. This drone is suitable for display

If you hesitate about showing your flying skills off, put the AP10 on display. Its polished, brilliant white design makes it the perfect centerpiece on a bookshelf. House guests will ask you about it.

3. Use the AP10 if you need to survey wide areas

Real estate agents, researchers and surveyors will find the AEE AP10 drone a handy tool. It scours vast areas and delivers sharp photography as it flies. It makes a handy tool for gathering important information about surrounding areas.

The Return to Home feature and GPS capabilities make this drone suitable for novice pilots. Should you lose your drone, it will return automatically to its take off point. The convenient facility allows you to track it. These features provide security if you have not flown a drone before. Lightweight, you will find it easy to manage.

Software bugs involving the application may seem frustrating at times, but these are not overwhelming. Calibrating the drone is not difficult once you master settings that you are comfortable with. If you keep it in clear view, it will receive the signal sent by your transmitter.

6. Do not fly near water or trees

Do not fly near water, if you want to prevent your drone from becoming wet. Do remember that it is not waterproof. Fly it in open spaces where there are few trees.

Quadcopter Arena hopes that you have found this AEE AP10 Pro drone review useful. It is a small drone that is sure to please.

This site uses Akismet to reduce spam. Learn how your comment data is processed.

Tips, Tricks & How To

QuadcopterArenA is a participant in the Amazon Services LLC Associates Program, an affiliate advertising program designed to provide a means for sites to earn advertising fees by advertising and linking to Amazon.com

This website uses cookies to improve your experience while you navigate through the website. Out of these, the cookies that are categorized as necessary are stored on your browser as they are essential for the working of basic functionalities of the website. We also use third-party cookies that help us analyze and understand how you use this website. These cookies will be stored in your browser only with your consent. You also have the option to opt-out of these cookies. But opting out of some of these cookies may affect your browsing experience.
Necessary Always Enabled
Necessary cookies are absolutely essential for the website to function properly. This category only includes cookies that ensures basic functionalities and security features of the website. These cookies do not store any personal information.
Non-necessary
Any cookies that may not be particularly necessary for the website to function and is used specifically to collect user personal data via analytics, ads, other embedded contents are termed as non-necessary cookies. It is mandatory to procure user consent prior to running these cookies on your website.
SAVE & ACCEPT